The judges ruled in favour of Total1, confirming the judgment of the first instance court which considered that this dispute fell within the jurisdiction of the commercial court. Civil society organizations (CSOs) believe that this decision is contrary to the spirit of this law and harmful to its implementation. The Court of Appeal did not rule on the merits of the case, i.e. on whether or not Total is complying with its vigilance duties. 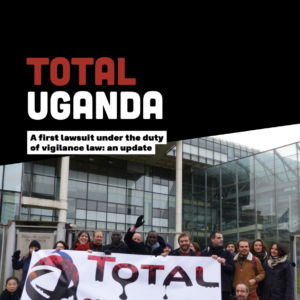 Total Uganda – A first lawsuit under the duty of vigilance law: An update

On January 30th, 2020, the Nanterre Civil Court of Justice denied its jurisdiction, ruling that the case should be judged by the commercial court 2. The six organisations considered that this decision was based on a misinterpretation of the law, and so appealed the ruling last March. They were supported on this point by two “voluntary interventions” (amicus) filed by three civil society organisations (ActionAid France, CCFD-Terre Solidaire and Collectif Éthique sur l’étiquette) and by the main French trade union, CFDT. The Versailles Court of Appeal has unfortunately just confirmed this decision, also considering that this case falls within the jurisdiction of the commercial court.

According to our organisations, this decision is not only contrary to the jurisprudence of the Court of Cassation (French Supreme court), but also to the spirit of the duty of vigilance law and to the will of the legislators. The purpose of this law is to make companies liable for the impacts of their activities on third parties, such as employees of subsidiaries, suppliers and subcontractors, local communities and the environment. These are therefore external issues, of protection of human rights and the planet, which cannot be reduced to a purely commercial dispute relating to the company’s internal management.

Commercial courts are courts of limited jurisdiction, composed of judges elected by their peers, who are elected upon to handle commercial disputes because of their technical knowledge of the business world. According to civil society, this decision implies a major extension of the jurisdiction of these courts, potentially to any dispute involving a commercial company.

Being the first case using this law, the stakes of this decision go beyond this single case, as many French civil society organizations expressed in an opinion piece last June 3. They recalled that this French law had become an “example to be followed at the international level” and that the decision of the court of Nanterre was “obstructing the fight against corporate impunity“. 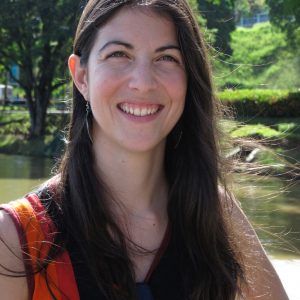 We are stunned by this decision of the Versailles Court of Appeal. In our opinion, entrusting cases based on the duty of vigilance law to the commercial courts is a misinterpretation of French law, which leads to ignoring the central objective of this law: to protect human rights and the environment.

Juliette Renaud
senior campaigner at Friends of the Earth France

She adds: “We are also very concerned about the delays that this procedural issue has caused: in the meantime, according to our investigations, tens of thousands of people are still totally or partially deprived of their land and livelihoods in Uganda and Tanzania 4. We now fear that the court decision on the merits may come too late for these affected communities“.

This decision is very disappointing, but we will continue the fight to ensure that this transnational corporation is compelled to respect its vigilance duties as enshrined in the law. This is the only instrument we have at our disposal to force Total to stop the violations on the ground.

He concludes: “Without this legal minimum, it is unfortunately certain that the rights of the affected communities will continue being violated, as voluntary commitments and declarations of goodwill have already proven to be useless”.

Friends of the Earth France, Survie and their Ugandan partners are considering filing an appeal before the Cour de Cassation (French Supreme Court).

The decision of the Versailles Court of Appeal is available here (in French).

See the January 30, 2020 press release of Friends of the Earth and Survie (in French).

« Duty of Vigilance: the protection of human rights at risk« , opinion piece signed by more than twenty organizations and published in La Croix, June 24, 2020 (in French).

See the report by Friends of the Earth France and Survie, A nightmare named Total – an alarming rise in human rights violations in Uganda and Tanzania, October 2020.