This legal action was taken by the NGOs Oxfam France, Friends of the Earth France and Notre Affaire à Tous. This is the first step towards an unprecedented climate litigation case – the first in the world to target a commercial bank for its high-risk activities in the oil and gas sector. 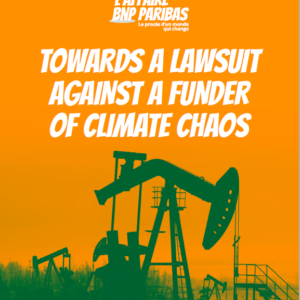 Towards a lawsuit against a funder of climate chaos

For more than 10 years, Oxfam France, Friends of the Earth France and Notre Affaire à Tous spoke out about the role of the financial sector in fueling the climate crisis 2. The NGOs engaged intensively with French banks and the French government to prevent dodgy transactions benefiting the coal, oil and gas industries. They are now taking legal action warning BNP Paribas to immediately stop supporting – both directly and indirectly – new fossil fuel projects and comply with the Paris goal of limiting global warming to 1.5°C.

The impact of the financial sector on the climate is felt by banks financing and investing in fossil fuel companies. BNP Paribas stands out in this respect. Despite repeated calls to stop new fossil fuel investments from the scientific community, the United Nations and the International Energy Agency 3, the French bank continues to feed the most aggressive companies responsible for developing new oil and gas fields and infrastructures. This carries a heavy cost. In 2020, the carbon footprint of BNP Paribas was larger than that of the French territory 4. 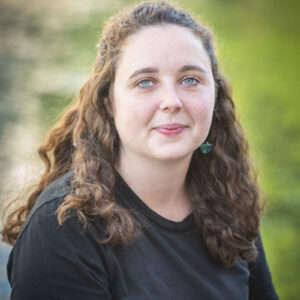 « We already know the names of the biggest oil and gas companies, including Total, who continue to turn a blind eye to the tragedies caused by the climate crisis, by planning dozens of new fossil fuel projects around the world 5. »

Lorette Philippot
campaigner at Friends of the Earth France

Lorette adds : « We are now warning of BNP Paribas, the number one financier of the eight European and North American oil and gas majors 6 to press the detonator of these carbon bombs.”

Our dependency on fossil fuels has left us defenseless against the soaring energy prices with the poorest families being hit the hardest. We need to urgently stop those responsible and prevent them from dragging us into another crisis. The situation is unbearable. This is why the NGOs have decided to confront the root of this systemic dependence on fossil fuels: their financial backing.

The NGOs took unprecedented legal action against BNP Paribas to abide by its legal obligations under the 2017 French duty of vigilance law within 3 months 7. The NGOs state that the bank fails to provide a robust plan to identify, mitigate and prevent environmental and human rights risks arising from its activities.

« The law on the duty of vigilance has explicitly enshrined in French law the legal responsibility of multinational corporations, including financial institutions, of protecting the environment and respecting human rights. Despite many greenwashing campaigns, the measures taken by BNP Paribas, top European financier of fossil fuel expansion 8, are neither sufficient nor appropriate.”

BNP Paribas has three months to comply with the law. If it fails to comply, the NGOs will take it to court. This legal action would be the first climate litigation in the world to hold a commercial bank to account for its legal obligations and to demand an immediate halt to its financial supports for new oil and gas projects.

This initiative will also be at the heart of a major campaign including a petition to raise people’s awareness of the role of BNP Paribas and of the financial sector in the fight against the climate crisis 9 10.

See details below in the key figures.

Reports published by our NGOs establishing the responsibility of banks in fueling the climate crisis, including BNP Paribas, over the past 5 years (in French).

A study analysing 195 ‘mega’ oil and gas projects led by oil and gas majors showed that these projects would be enough to exhaust the remaining 1.5°C carbon budget. The Guardian, 2022. Revealed: the ‘carbon bombs’ set to trigger catastrophic climate breakdown.

This pioneering French law is expected to make considerable progress in terms of environmental justice. It obliges certain large French multinational companies, including banks and other financial actors, to take measures to identify and prevent risks of serious violations of human rights, human health and safety, and the environment resulting from their own activities and those of companies they directly or indirectly control, as well as those of their suppliers and subcontractors with whom they have an established business relationship, both in France and abroad. These measures must be published annually in a vigilance plan, implemented effectively and monitored by the company to ensure their effectiveness.

See details below in the key figures.

The NGOs have launched a petition, accessible on the Affaire BNP website.

This financial data is taken from the international Banking On Climate Chaos research, published annually and supported by nearly 500 civil society organisations worldwide. The financing volumes above cover loan, underwriting – excluding bilateral transactions – in which BNP Paribas was involved between 2016 and 2021, in proportion to the share of the recipient companies’ activities in fossil fuels or the designated sub-sector.